beyond the invisible fence

Despite the dreary greyness of March in Seattle, I assure you that spring is near!  That means it is time to start thinking more seriously about spending more time outdoors.  After all, being  outside is healthy for you!  Dog-owners who brave the 'monsoons' and seemingly endless drizzle this time of year (myself included) can attest that its really not that bad once you're out in it for a bit.  Armed with an arsenal of gore-tex, wool, and two pairs of rain boots I enjoy imbibing the signs of seasonal change, as well as the architectural evolution of my neighborhood.
Recently, I began running as a subcontractor for a service known as Djog.  Typically runners provide busy dog owners with vigorous 30-minute runs once a day, or as needed.  Through this pursuit I've come to observe the homes and habits of fellow dog owners (and canines) in my neighborhood.  Thus, I have begun further exploration into the behavior of various breeds in effort to effectively approach 'dog-scaping' as a garden design direction.  As a seasoned residential designer, I've had several dog-owners as clients in the past.  Most accused their best friends of being either notorious 'diggers', neurotic 'shredders', escape artists, or just having an abundance of energy (i.e. thrashing anything in their path).

Of course this can prove to be a huge challenge if you actually want a decent-looking, thriving garden space to enjoy.  The key to success and good times (i.e. eliminating yelling and frustration) is to think like a canine, give up on perfectionism, and learn forgiveness.  Here are some helpful 'dog-scaping' tips and solutions that I've come across:


Access & protection:
Observe the pets then try to accommodate them.  For the dog-accessible portion of your yard, think in terms of establishing border control as well as creating a nice doggy retreat space. Some elements to consider incorporating include:  barriers such as decorative pickets, seat walls, natural stacked-stone edging, and building raised beds; such as cedar garden boxes.
To keep an escape artist safe- try installing an underground barrier made of re-bar, chicken wire, or concrete to prevent tunneling under the fence. 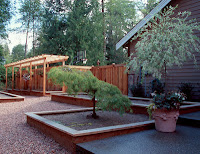 Create paths for traffic, exercise, and patrolling:
Dogs need exercise!  Paths give them a designated space to do it as well as a venue to perform their perceived job of patrolling the property.

Sacrifice a few feet along the fence for a perimeter path to simultaneously satisfy both needs. If your dogs have already created their own paths through the garden, don't try to redirect them. Instead, turn their well-worn routes into proper pathways.  A 30" clearance is enough for most dogs. Plant a screen to hide this dog run if you like; creating their own dog 'secret garden'.
Use gentler hardscape elements such as smooth flagstone set in round rock pebble (forming a dry creek bed) that dogs can comfortably tread.  Think of it more as a running track to provide a route for exercise and play time.


Installing marking posts & dog friendly structures:
A sculptural piece of stone or driftwood feature can provide a suitable spot to mark the territory. Other elements such as a sand digging pit can divert their attention and energy in the right direction.

Like humans, dogs enjoy basking in the sun. So by all means, give them a deck or a patch of lawn for sunbathing. Most dogs overheat easily, so it's even more important to provide them with cooling retreats. Create a shady retreat with a 'pooch pergola' or add a small water-feature (think beyond the plastic kiddie pool). Dogs will happily share structures with their owners, but most dogs seem to appreciate having a shelter of their own, such as a doghouse.
Other cool features that I've come across are a dog 'look-out' (ideal for sloped sights) and a water bowl station that recirculates (added as zone to an existing irrigation system).
Finding sensible plants:
This is such a challenge! Planting near paths should have soft foliage but be sturdy enough to withstand rough-housing.  There really are no plants that can withstand heavy pet traffic, so plant protection may be necessary, as well as having a designated space for digging.  That being said, try selecting tougher species such as vinca minor (a common groundcover) and use stronger, woody shrubs instead of tender perennials.  Secure your vegetables, herbs, and other edibles in boxes or containers. Think of it as 50% protection and 50% trial and error.
For mulch try to use softer, small cedar chips or dark medium-fine mulch. Its easier on paws and  won't cling most coats. Pea stone and crushed gravel will tend to migrate and hazelnuts just seem like they would be uncomfortable on tender paws.

Okay, so I realize that this really nothing all that new conceptually; but I can attest to it being a good approach, or at the very least a great start to expand on and push further into the limits of 'barkitecture'... perhaps?!  For further info check out Sunset (where I've found some) and Petscaping:  a cool site that combines training and planning.

I do like the thought of a green-roofed dog house and a fresh water bowl feature for my husky mix, Cooper someday.  Please feel free to share more ideas!

After several years of working for some of Seattle's finest landscape design-build firms, I have carved my own path as a designer. My recent collaborations and volunteer efforts with other design firms and disciplines, contractors, and architects has encouraged me to grow. Located in the Ballard neighborhood, I have found a fulfilling sense of community as well as a lively environment to work in.
I provide a high level of design service that is client conscious from the initial concept though construction implementation; using honest materials and eco-friendly construction methods whenever possible. Predominately naturalistic in style, my current design influences include Japanese minimalism, mid-century revival, and designing for site specific micro-climates such as roof tops. Inspiration comes from my observation of the natural world; as well as exploration of the built environment and the people living in it. I feel fortunate to live and work here in Pacific northwest; where there exists an abundance of natural beauty, an emergence of a more forward thinking population, and growth opportunity in several aspects of life.